THE ESTABLISHMENT in Wales is artificially small.

Normally, a country of three million would be able to call on the services of a substantial number of the great and the good.

However, the requirement to have a Welsh-speaker in many key posts drastically reduces the number of eligible candidates.

This means some family ties and connections can often come to dominate parts of Welsh public life.

In the past quarter of a century Welsh broadcasting has been controlled by a powerful media clan and its allies.

This is headed by Geraint Talfan Davies and includes his son, Rhodri, and close friend Menna Richards.

Broadcasting is a particularly sensitive area given its traditional role in holding other parts of the establishment to account.

Rebecca has been shining a light on the Talfan Davies clan and its allies.

The Son Of The Man From Uncle — a profile of the family history of current BBC Wales supremo Rhodri Talfan Davies.

THE SON OF THE MAN FROM UNCLE
RHODRI TALFAN DAVIES rocketed through the ranks of BBC Wales to become its director at the age of 40. Would he have done it without the mighty patronage of the Talfan Davies clan?
Photo: BBC Wales

The son of Geraint Talfan Davies, he was carefully groomed to take over the Corporation.

He was appointed despite never having made a television programme in Wales.

In The Name Of The Father? examines the rise of Menna Richards who was the boss of ITV Wales when she took over BBC Wales from her mentor Geraint Talfan Davies in 2000.

One of those who became prosperous in Menna Richards’ reign at the Corporation was her sister.

Her company prospered by making programmes for BBC Wales.

More articles are in the pipeline.

These were powerful enough to get a critical Rebecca documentary called Hidden Agenda taken down.

Jones revealed he’d sacked Williams in 2001 for sabotaging the company.

Jones gave the interview in 2003 but ITV Wales decided not to broadcast it.

In 2012 Rebecca included the interview in a damning documentary called Hidden Agenda. 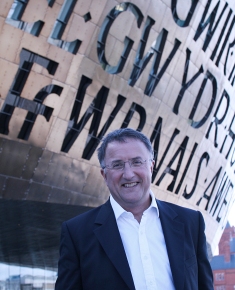 “BILLIONS”
RHODRI WILLIAMS is a poacher turned gamekeeper. Gaoled in the 1970s for his part in the campaign for a Welsh-language TV channel, he tried but failed to become a media tycoon. Hence the “billions” nickname. For 14 years he’s been Ofcom’s man in Wales but his departure is surrounded by controversy.
Photo: Ofcom.

A year later, ITV Wales insisted the footage be removed.

The video had to be taken down.

The full story is told in the article ITV Bid To Gag Rebecca.

The material in the documentary is still available, see A Man of Conviction?

Rhodri Williams has decided (March 2018) to step down as Ofcom’s Wales Director.

He leaves a Cardiff office hit by scandal.

Ofcom Wales awarded a valuable contract to the lobbying firm Deryn Consulting without going out to tender.

Ofcom HQ initially defended its actions but then admitted it had broken Ofcom’s own procurement rules.

Now another scandal is brewing over patronage.

For many years the Regulatory Affairs Manager Elinor Williams was Rhodri Williams’ mistress.

Since she first joined the Cardiff office as Communications Manager in 2007, she’s risen to become the de facto No 2 in Wales.

Last year she and Rhodri Williams were married.

Read more in The Mistress Of The Man From Ofcom.

More recent developments are covered in Update: The Mistress Of The Man From Ofcom.

In June 2018 Ofcom decided to appoint a career civil servant to take over from Rhodri Williams.

See The End Of The Mr and Mrs Williams Show for more details.

DONATIONS  If you would like to support the work of Rebecca, you can do so by clicking on the button …