FORMER POLICE superintendent Gordon Anglesea is one of the key figures in the North Wales child abuse scandal.

A police inspector at the time of the offences, he was also a freemason.

He first came under suspicion in the early 1990s when journalists accused him of abusing boys at the Bryn Estyn children’s home near Wrexham.

In 1994 he won a celebrated libel victory over four media companies — the Independent on Sunday, Private Eye, the television company HTV and the Observer — which brought him £375,000 in damages.

The jury, which voted 10-2, did not believe three witnesses who claimed they’d been abused.

One was found dead in his Wrexham bedsit shortly afterwards.

Anglesea’s victory did little to allay public concern that a cover-up had taken place and, in 1996, the North Wales Child Abuse Tribunal was established.

The Tribunal — which heard evidence from Anglesea — published its report Lost In Care in 2000.

It concluded there was no evidence Anglesea was an abuser.

For more than a decade, the issue was generally considered dead.

Only Rebecca was still investigating.

In 2010 we published a long article — The Trials of Gordon Anglesea — highlighting the discrepancies between Anglesea’s evidence to the Tribunal and what he had told the jury in the libel action.

Two years later the Jimmy Savile scandal erupted — and the North Wales child abuse scandal was back in the public eye.

A new police inquiry — the National Crime Agency’s Operation Pallial — was set up.

It examined new allegations against Anglesea. 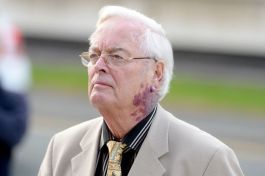 In January 2014 Rebecca published the article — Exclusive: Gordon Anglesea Arrested — which revealed the retired superintendent had been arrested on suspicion of historic child abuse.

In September 2016 his criminal trial opened in Mold Crown Court.

He was accused of four counts of sexually assaulting two boys in the 1980s — another six counts against a further two boys were not proceeded with.

Rebecca was the only media outlet to have a reporter in court throughout the six week trial.

On October 24 the jury of six men and five women unanimously found him guilty of four counts of indecent assaults.

This examined the allegation that, in 1996, Anglesea had been accused by a “female acquaintance of his family” of indecent assault.

The article revealed, for the first time, that Anglesea lied when first questioned under caution about the incident by police. He was not charged.

A few days later Rebecca also published a second article — The Fall Of Gordon Anglesea — which remains the definitive account of the trial.

When Anglesea was sentenced to 12 years in prison in November, Rebecca published the article Gordon Anglesea: Justice.

It contains a list of all the known allegations made against him.

Anglesea has always protested his innocence and was planning to appeal.

Meanwhile — as the article Exclusive — Gordon Anglesea: Assets Under Threat reveals — inquiries are under way to see if any of his assets, including his police pension, can be seized.

His death — apparently due to natural causes — is covered in the article The Death Of Gordon Anglesea.

The Rebecca investigation of Gordon Anglesea forms part of the much larger inquiry into the failures of the North Wales Child Abuse Tribunal (see the Child Abuse page for more on this).

Anglesea’s freemasonry is explored in the article — A Mason-Free Zone?

In a forthcoming article, A Force For Evil, Rebecca investigates why Anglesea escaped justice for so long.

The reason is a conspiracy was hatched among some senior officers in the North Wales Police.

They realised the force had failed to investigate abuse allegations in the 1970s and 1980s — and decided to cover it up.

Part of the plan involved protecting Anglesea at all costs.

You can support this long investigation — it started 19 years ago and has cost £15,000 so far — by making a contribution: