IS THE BBC ANTI-LABOUR?

THE PRESS GANG report on the Panorama programme Is Labour Anti-Semitic? was published on December 7.

Press Gang found the BBC was biased in its journalism, leaving the Corporation open to the charge that the broadcast was a deliberate attempt to interfere in the General Election.

The interim report lists serious breaches of the BBC’s Editorial Guidelines in the 59 minute programme first aired on July 10.

You can read the report here.

The Panorama programme is still available on iPlayer — the link is here.

The BBC’s Editorial Guidelines can be accessed here.

The Press Gang 16 page report — rush-released to be available before the election — cites nine separate occasions when programme-makers were in breach of the Editorial Guidelines.

Copies were delivered  to various media organisations in London.

A hundred went to senior managers and journalists at the BBC.

Other copies went to the Channel 4 News, Sky News, LBC, the Guardian and the Times, the Sunday Times and the Sun on Sunday. 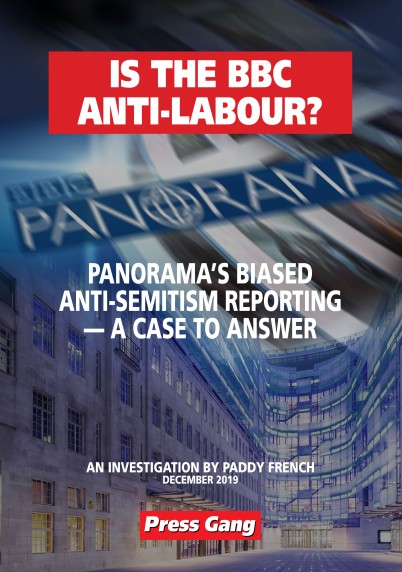 Our investigation into this rogue journalism continues.

This is important work and you can underwrite this project by supporting our crowdfunded site — here.

THE REPORT was published on Saturday, 7 December 2019.

The next morning, the BBC Press Office got in touch and asked for the following statement to be included:

The BBC stands by its journalism and we completely reject any accusations of bias or dishonesty. Panorama explored a topic of undoubted public interest, broadcasting powerful and disturbing testimonies from party members who’d suffered anti-Semitic abuse. We also heard from former Labour officials, some of whom defied non-disclosure agreements to speak out about their experiences inside the Party and its anti-Semitism crisis. This shows the serious questions facing the party and its leadership on this issue. The programme adhered to the BBC’s editorial guidelines, including a full right of reply for the Labour Party. John Ware is a highly experienced and respected investigative journalist, whose track record includes critically-acclaimed and award-winning reports. We reject any claims Panorama took any of the evidence out of context.

NOTE
1 Paddy French declares an interest in this issue. A life-long Labour voter, he joined the party after Jeremy Corbyn was elected Leader.
2 Much of this article is based on the work of others including The Canary, Electronic Intifada, Vox Political and Jewish Voice for Labour.
3 On December 13 the article was amended to include the statement from the BBC.
4 There is a typo in the Press Gang pamphlet Is The BBC Anti-Labour? In the note on page 15, the figure 763 should read 673. The error does not affect the other figures in the note which remain correct.

This entry was posted on Saturday, December 21st, 2019 at 4:30 pm and is filed under BBC Wales. You can follow any responses to this entry through the RSS 2.0 feed. You can leave a response, or trackback from your own site.

One Response to IS THE BBC ANTI-LABOUR?