Note: this article was originally published on the Press Gang website.

ONE OF the most common criticisms of Jeremy Corbyn is that he’s unelectable.

Critics point to the poll ratings, with Labour currently trailing the Tories.

But little attention has been paid to challenger Owen Smith’s electoral record.

In the past decade he and his wife have stood in four elections — all in traditional Labour strongholds.

They’ve lost two of them.

Even when Owen Smith wins, he does so with a reduced majority.

Some voters are not impressed with his style: he was nicknamed “Oily” in one election and arrogant in another.

Is there something toxic about “brand Smith”?

THREE YEARS ago Owen Smith was the driving force behind a political manifesto.

He co-edited a series of essays called One Nation: power, hope, community.

” … a group of the party’s rising stars call for it to end the lockout of local communities from power and to bury top-down statist solutions that have failed in the past.”

It was a time when Labour was searching for a way to appeal to the middle ground of British politics.

Labour Leader Ed Miliband summed it up in the preface:

In the opening chapter Owen Smith was candid about the problems he faced in his own constituency, Pontypridd in south Wales.

“Membership and majorities are counted carefully now, when once they were weighed. Belief in our mission is dwindling.”

He was also clear about the solution:

“I believe the answer comes in two parts: we need both bottom-up participation and leadership from the top; to simultaneously cultivate our roots and command the heights.”

But he admits his attempt to regenerate Labour grass-roots in Pontypridd isn’t working:

“ … in the three years since I was elected the means to galvanise that engagement has proved elusive and frustrating.”

“This is undoubtedly partly a result of the many previous false dawns that have promised progress but failed to deliver: it’s hard to feel progressive when there seems so little sign of progress for you and yours.”

But he was still confident things could be turned around.

“Slowly but surely, Labour is re-engaging with dialogue in our communities, and developing new common objectives and solutions that will prove the real foundations for our rebuilding.”

Part of the strategy was a move to bring greater democracy to the party:

“Iain McNicol [Labour’s General Secretary] has been leading reforms in the party aimed at building a more open and inclusive movement.” 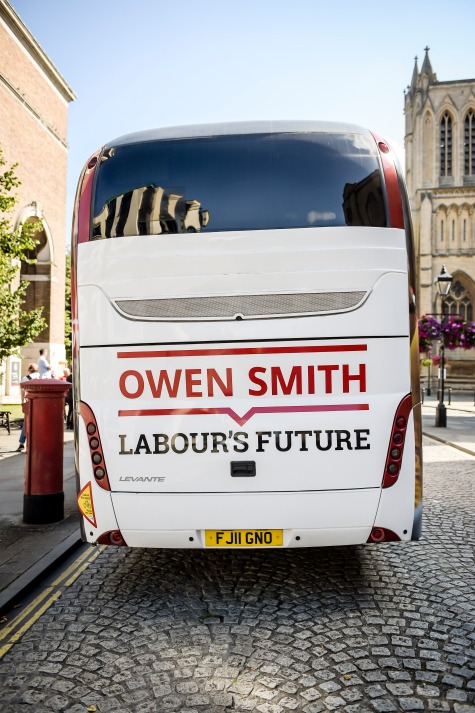 BACK TO THE FUTURE?
THREE YEARS ago Owen Smith was praising Labour for “… leading reforms in the party aimed at building a more open and inclusive movement.” But it was not until Jeremy Corbyn stood for leader that membership began to rocket — from under 300,000 to more than 500,000. Ironically, the party’s National Executive Committee have now barred some 130,000 recently joined members — most of them believed to be Corbyn supporters — from voting in the leadership election.
Photo: Ben Birchall / PA

In Pontypridd Smith thought he’d found a way to galvanise the community:

“Pontypridd Citizens, which will bring together churches and parties, unions and residents, in order to determine local needs and empower local leaders, is launching this year, taking its cue and its form from similar schemes that are energising communities across Britain.”

“It will mark a new beginning in the politics of Pontypridd, and Labour will be at its heart.”

The organisation should be three years old by now.

But Press Gang could find no evidence of Pontypridd Citizens — and when we asked people in the constituency, no-one had never heard of it.

We asked Owen Smith for an explanation.

WHEN OWEN SMITH was chosen to be the Labour candidate for the 2006 Blaenau Gwent election, he had no experience of grass-roots politics.

The seat had a troubled past but the party was expecting it to revert to being a Labour stronghold.

Owen Smith probably thought he had a safe seat for the rest of his political career.

In 2005 popular local politician Peter Law stood as an independent.

A former Labour member of the Welsh Assembly, he’d been barred from standing as a candidate for the general election because the party had imposed an all-woman short-list.

Many Labour voters deserted the official candidate and chose the independent.

His agent, Dai Davies, decided to stand in the by-election that followed.

Labour strategists felt Law’s death had taken the sting out of the rebellion — and that the faithful would return to the fold.

In the early days of the campaign a poll gave Owen a massive 12 per cent lead.

But Smith’s organisation was cack-handed.

Telephone canvassers angered voters when they began calling within days of Law’s death.

Activists were bussed in from all over Britain but they knew nothing about Blaenau Gwent.

Smith himself acquired the nickname “Oily”.

Dai Davies was a well-known political figure who outgunned Smith on many fronts.

One of them was Nye Bevan, the political midwife of the NHS, whose old Tredegar constituency was now part of Blaenau Gwent

But Dai Davies could trump that.

He was a trustee of the Bevan Foundation, a left-wing think tank formed in his memory.

Smith did not become a trustee of the Foundation until after the by-election.

The result was Dai Davies won a narrow victory — by just 2,488 just votes.

It was a bruising experience for Smith and he decided not to seek the nomination again.

THE LIKELIHOOD is that plans were already afoot to shoehorn Owen Smith into the Pontypridd constituency.

Just before Christmas 2009 the sitting MP, Kim Howells, announced he was standing down as the MP.

Soon after, there were press reports that Owen Smith was ringing members of the constituency Labour Party to make his pitch to replace Howells.

Howells is, of course, an old friend of Owen Smith’s father, Dai Smith but Owen Smith denies that the Howells played any part in his selection.

NEPOTISM HOUSE?
OWEN SMITH’S home in his Pontypridd constituency has an intriguing past. Shortly after he was elected in 2010, the MP paid £285,000 for the north wing of the listed building in Llantrisant. It was previously owned by the sister of former BBC boss Menna Richards who bought the property shortly after she formed an independent production company. She won millions of pounds worth of contracts from the Corporation. It was under Menna Richards that Owen Smith made his breakthrough into television — as producer of the politics series Dragon’s Eye in 2000.
Photo: Press Gang

In Pontypridd Labour was united — but there were other problems.

The Lib Dems, led by Nick Clegg, were riding high in the polls — and they had a well-known local candidate in Mike Powell.

When Labour councillor Glynne Holmes had his picture taken with Powell as part of a campaign to save the Post Office in Llantrisant, he found himself the subject of a disciplinary hearing.

He was cleared but it was a sign of how anxious Labour officials were.

“There were relieved faces as Labour held on to the Pontypridd seat.”

In the 2015 election, when Lib Dem support collapsed, Smith was able to clawback less than 1,400 of the lost votes.

In the ten years from 2005 to 2015, Labour has lost a quarter of its support in Pontypridd.

There was a vacancy in the Llantrisant ward where she and Owen Smith had lived for five years.

The Labour Party ticket plus the fact that her husband was the MP were expected to secure her election.

But there was another candidate who was far more active in the town.

Louisa Mills, an independent, had started a local charity and was campaigning for a community garden.

Owen Smith may not have been as asset in the poll.

Some residents find him arrogant.

“He’s risen quickly … due to his PR skills and actually believes his own hype.”

“In my view he cares more about power than he does about using that power to help people.

All of this means Owen Smith and his wife have now contested four elections between them.

In the two elections Owen Smith has won, he has presided over a decline in the Labour vote.

What will happen when the right-wing press goes to work on him?

Notes
1
The statistics for Owen Smith’s Pontypridd constituency make disturbing reading for Labour. These are are the number of votes cast for Owen Smith’s predecessor Kim Howells and the share of the poll:
1989   20,500   53%
1992   29,700   61%
1997   29,290   64%
2001   23,000   60%
2005   20,900   53%
From a peak of 64% of the vote in 1997 — the landslide year when Tony Blair became Prime Minister — it was down to 53% by 2005.
Owen Smith hasn’t arrested the decline. The result for the two elections he’s fought are:
2010   14,200   39%
2015   15,600   41%
In the face of a Lib Dem resurgence in 2010 he was lucky to hold on to the seat. And even with the collapse of the Lib Dems in 2015 he was able to retrieve only a small proportion of the Labour vote he’d lost in 2010.
2
This the fourth instalment of this investigation. The other articles are:
Owen Smith: Forged By Patronage and Nepotism?
Owen Smith: A Man For All Seasons
BBC Forced To Correct Owen Smith Profile.
Click on a title to read it.
3
Press Gang editor Paddy French declares personal interests in this story:
— in the 1980s he was the editor of Rebecca magazine which was in competition for a substantial Welsh Arts Council grant. One of the competitors was Arcade magazine and Dai Smith, Owen Smith’s father, was one of its supporters. The council’s literature committee chose Rebecca but the full council overturned the decision — and gave the grant to Arcade
— French is one of the thousands of traditional Labour voters who have joined the party following Jeremy Corbyn’s election as Leader. He will be voting for Corbyn in the Leadership election.
4
The Rebecca investigation into nepotism and patronage at BBC Wales is explored in the articles:
The Son Of The Man From Uncle
In The Name Of The Father?
5
The cover block pic is by Gareth Fuller / PA.

DONATIONS
Investigative stories like this one are expensive and time-consuming to produce. You can help by making a contribution to the coffers. Just click on the logo …

CORRECTIONS
Please let us know if there are any mistakes in this article — they’ll be corrected as soon as possible.

RIGHT OF REPLY
If you have been mentioned in this article and disagree with it, please let us have your comments. Provided your response is not defamatory we’ll add it to the article.

This entry was posted on Wednesday, September 7th, 2016 at 9:57 am and is filed under Owen Smith, Uncategorized. You can follow any responses to this entry through the RSS 2.0 feed. You can leave a response, or trackback from your own site.